25 Narcissistic, Myopic Protestors say they are the Church 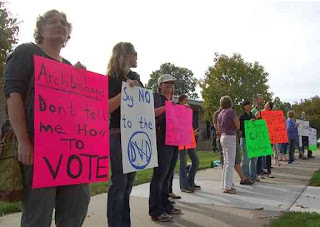 .
25 out of 1.2 billion Catholics showed up at the Chancery today to protest Archbishop John Nienstedt's position on Marriage being a state for one man and one woman. Reporters, excited about the protest, followed them.

A group of Catholics who oppose the church's mailing of DVDs opposing same-sex marriage protested outside the Cathedral of St. Paul on Sunday.

Church member and protester Deb Bittner said she wants people to know there are Catholics who disagree.

"I think we're all a bunch of Catholics who are very liberal [but] still feel Catholic," Bittner said. "People will say to me 'Why don't you just leave,' but you know this is my church and lay people should have a voice in the church."

Bittner said the demonstrators haven't tried to talk to the Archdiocese of St. Paul and Minneapolis, and the archdiocese hasn't contacted them. A spokesman for the archdiocese said they stand behind the DVD, and also support gay people, just not same-sex marriage. Minnesota Public Radio

I "feel Catholic" too. Let's all have a hug.