.
The Rev. Glen Jenson told of the church closings at Saturday mass at Holy Cross Church in Minneapolis.

The emotions swept through parishes across the archdiocese Saturday as it unveiled its most dramatic restructuring in decades, closing 21 churches and merging congregations into 14 parishes. 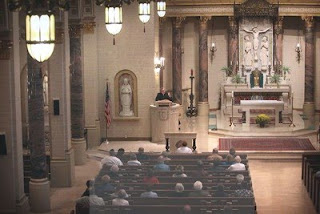 Heartbroken and bitter, Peg Vogt listened to her priest at St. Paul's Church of St. Andrew deliver Saturday's homily about the Archdiocese of St. Paul and Minneapolis' plan to shutter her church and 20 others.

"It's a sinful thing," said Vogt, a Maplewood resident who saw another parish church closed a few years ago. "It's sad, sad -- there's no justification."

In his somber homily, the Rev. Mark Juettner read from the archdiocese's statement about the plan, under which 21 parishes, including St. Andrew, will close their buildings and be merged into 14 receiving parishes. "There is no easy way to share this news with you," he told more than 100 worshipers in the vaulted sanctuary.

"I cried when I heard," said parishioner Richard Willy. "It's like they busted up a good family, which we are. I never expected this."

The emotions swept through parishes across the archdiocese Saturday as it unveiled its most dramatic restructuring in decades. The archdiocese began in February 2009 to look at ways to deal with a priest shortage, tighter budgets and shifting demographics, challenges faced by Roman Catholic parishes nationwide. In addition to the mergers, 33 parishes will join new cluster configurations in which one pastor will lead two or more parishes. Nearly 25 percent of the archdiocese's 213 parishes already share a pastor. After the mergers are implemented, the archdiocese will have 192 parishes.

Archdiocesan officials say structural changes won't begin before January 2011 and will be implemented over several years. It's not clear when parishioners will begin to see church structures closing.

Though some schools may be closed, all will continue to operate at least through the current school year.

Archbishop John Nienstedt acknowledged in a written statement that change will be painful. "Please know of my personal concern and prayers for members of this local church who will eventually suffer the loss of a beloved parish home, or parish and for Catholic school employees who are worried about losing their jobs and others deeply impacted by these changes."

Among those feeling the pain was Lorie Archambault, whose four children were confirmed at St. Clement Church in northeast Minneapolis, one in a small cluster of churches slated to merge with nearby St. Anthony of Padua. One of Archambault's children was baptized and two were married in the towering brick church.

"Right now, there is uncertainty and confusion and sadness," she said, noting that the number of parishioners at St. Clement has gone down in recent years and that many are senior citizens. In addition to St. Clement, Holy Cross and St. Hedwig parishes will also merge with St. Anthony.

She said she hopes that the merger will bring about "a larger, stronger community, instead of several small pockets."

Carol and Bill Raeker of Coon Rapids attended mass at St. Hedwig with daughter Katie. Although the family is registered at the Church of the Epiphany in Coon Rapids, they drive into the city because they love St. Hedwig's "small-church feel," Carol Raeker said.

"It's intimate. It's always the same parishioners every week," she said.

'The needs of the times'

Of the 21 churches slated to be merged into other parishes, six are in St. Paul and five in Minneapolis. The rest are in suburbs, exurbs or small towns. Diocesan officials say a disproportionate number of parishes and school buildings are in areas where the population is no longer able to sustain more than one parish or school. Maintaining too many aging buildings is a financial burden the archdiocese has tried to address with the plan.

The archdiocese has grown to nearly 800,000 members in the last decade, an increase fueled by immigration, with some suburban areas also seeing growth in recent years.

"The church must do what the church always does -- respond to the needs of the times and strategically seek to meet these new immigrants' needs," the Rev. Peter Laird, archdiocese vicar general, said at a news conference Saturday at archdiocese headquarters in St. Paul.

The archdiocese also expects to have 19 fewer priests eligible to serve as pastors in 2020. Currently there are 302; 182 are eligible to be pastors.

It's possible that a merged parish might worship in two or more buildings, Laird said. But in many cases, mergers will mean the loss of a church building. Decisions regarding church buildings and other property of merging parishes will be made by local parish leaders in consultation with the archbishop and Presbyteral Council, a representative body of priests, he said. If they determine a building should be sold, all "sacred items" -- including, in some cases, stained-glass windows -- would be registered and removed, said Laird.

Buildings that are sold would not be used for "profane use," he said. "We don't want it turning into a bar."

Parishes may appeal a merger within 10 days of the date of the decision.

At St. Andrew's in St. Paul, 55-year member Ed Rauchwater hadn't heard the news as he arrived at Saturday's mass. Told about the plan to close his parish, he visibly blanched.

"Masses here used to be packed, but these days, there's too many churches around. I'll still go to church -- I just don't know where," he said.

The Rev. George Kallumkalkudy, pastor at St. Austin in north Minneapolis, which is to be merged with St. Bridget, said parishioners are sad, but "understand something has to be done because of all these communities are becoming smaller."

"The majority [of parishioners] understand the need for change, but still they have the feeling that something is happening in their house, a sad event," he said. "This has been their spiritual home for many, many years." Star Tribune