.
"Mergers" under the Church's canon law does not necessarily mean that all the parishes in the merger will close. Three out of six will survive in New Prague. 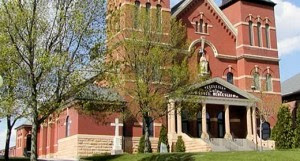 The Church of St. Wenceslaus

Six parishes in the southwestern part of the Archdiocese of St. Paul and Minneapolis are slated to merge under the strategic plan announced Oct. 16, and most parishioners are not surprised.

Under the plan, St. Wenceslaus in New Prague will receive the nearby parishes of St. Thomas in St. Thomas, St. Benedict in New Prague, St. Joseph in Lexington, St. John the Evangelist in Union Hill and St. Scholastica in Heidelberg.

The parishes are among 21 parishes that will merge with 14 receiving parishes during the next several years, according to the plan, bringing the archdiocese from 213 parishes to 192.

“We knew there would be a change coming before too long,” said Nicole Schmitz, 38, a parishioner at St. Wenceslaus. Her husband, Brad, 44, is a lifelong member of St. Wenceslaus. The change will be harder for those merging into St. Wenceslaus than for its current members, Nicole added.

The parish enrollment at St. Thomas, St. Scholastica, St. Benedict and St. Joseph is under 80 households each. St. John the Evangelist has 219 households. St. Wenceslaus is by far the biggest parish, with 1,355 households.

“In the interest of our whole region and the common good, this is a good decision,” Father Kevin Clinton said after announcing the merger at the end of Saturday evening Mass at St. Wenceslaus Oct. 16. He learned of the merger at a meeting for priests the day before, and he was not surprised by the archbishop’s decision, he said.

“I was very pleased with the thought and the sensitivity and the consultation that led to a good decision,” he added.

The six parishes began looking at a new arrangement when Father Clinton became pastor of St. Wenceslaus in 2006 — long before the start of the archdiocesan strategic planning process in February 2009.

At that time, one priest served St. Wenceslaus, and two elderly priests served the other five parishes. At present, Father Clinton, his associate, Father Dave Barrett, and a retired priest are celebrating 10 Masses each weekend in five sites, some of which are just a few miles of one another. Mass has not been celebrated at St. Joseph for more than a year.

After the six parishes merge into one, Mass will be celebrated regularly at three sites: St. Wenceslaus, St. Scholastica and St. John the Evangelist. The churches of St. Thomas, St. Benedict and St. Joseph will close sometime after Jan. 1, when the merger becomes official.

St. Benedict parish council member DeAnn Croatt, 58, said losing her parish will be sad, even though it’s not a surprise. When she moved to the area in 1978, she and her husband Peter “shopped” for a parish, and they chose St. Benedict. They liked its small community, she said.

“We always knew we could go to St. Benedict. That’s just what life was,” DeAnn Croatt said. “Now it just feels like we don’t have a home, a parish home.”

She has questions about what will happen to St. Benedict’s parish buildings, which include a church, school building and rectory.

Some fellow St. Benedict parishioners are resentful of being merged with St. Wenceslaus because of its large size, Peter Croatt said.

Father Clinton said keeping two small worship sites in the merged parish is important for ministering to Catholics who like the intimate church atmospheres.

He plans to attend three workshops on pastoring a parish through merging, he said, hoping to blend the parishes’ best practices into the new parish and avoid the parishes’ current weaknesses. The greatest challenge will be handling the parishes’ assets and liabilities, he said. As buildings close, Father Clinton expects to plan closing and welcoming rituals for the new parish community.

For some parishioners, the transition won’t be difficult. St. John the Evangelist parishioner Pam Glisczinski, 42, said that as long as there’s an 8:15 p.m. Saturday Mass somewhere, as there was for years in Union Hill and now is in Heidelberg, she’ll be happy. She’s a dairy farmer, and it’s the best time for her family to attend Mass.

“This is not just about merging and closing,” Father Clinton said. “It’s about creating something that is sustainable and good for the future. . . . The death and resurrection of Jesus happens for communities, too.” Catholic Spirit