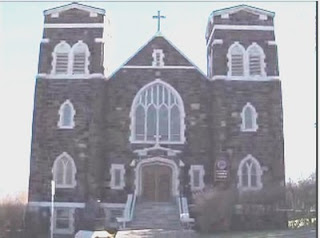 Denice Campanario, organist at St. Peter’s Catholic Church since she was 12, stands near one of the stained-glass windows that her great- grandfather, Emil Solz, donated to the church. It features Mary talking with Elizabeth and is Campanario’s favorite. (Bob King / rking@duluthnews.com)

The parish at 818 W. Third St. technically is suspending operations, not closing, said Kyle Eller, spokesman for the Diocese of Duluth.

The reason was strictly financial, said Denice “DD” Campanario, who has been the parish’s organist since she was 12. An aging, dwindling congregation was facing daunting expenses to maintain the imposing stone church, which opened its doors in December 1927.

The cost of repairing the roof and the tuck-pointing between the bluestones has been estimated at $125,000, said Pat Valentine, 66, who like Campanario is a trustee of the church. “That didn’t include any of the electrical. That probably would be another 30, 40 thousand.”

And the parish was down to 50 family units, many of them older couples, said Campanario, whose family has been part of St. Peter’s for six generations. “I’m 60 and my husband is 66, and we’re among the younger people.”

The parish was established in 1905 to serve the Italian-American community. It originally was housed in the former St. Jean Baptiste Church at 11th Avenue West and Superior Street, in Duluth’s “Little Italy” neighborhood. When the present building opened, the congregation brought the bell from the old building. First rung on Sept 15, 1885, it weighs 550 pounds.

Valentine rings the bell 33 times before each Mass, one time for each year of Christ’s life on earth. “I tell you, it’s a big bell,” he said. “I told the priest and Denice that every time I pull it I hope the bell isn’t going to come tumbling down.”

Ground was broken for the building in 1925. Italian stonemasons, bricklayers and cement workers donated the labor on the foundation and worked for half-wages on the rest of the building, Campanario said. The stones were cut from the hillside near the Twin Ponds.

The parish has been scaling back for 50 years. The school was closed in the late 1960s, Campanario said, and it’s now a child-care center. The rectory was sold in the 1980s. A grotto, which replicates the Grotto of the Lourdes in France, was constructed in the 1940s. Today, it’s barely visible behind a gate on one side of the child-care center.

Campanario said the congregation reached its final decision in September. “We’ve done everything we can do,” she told her fellow parishioners. “But it’s time to put it in God’s hands and let go.”

Although no homilies were preached in Italian in her lifetime, Campanario said St. Peter’s retained its Italian heritage and has been the home base for the Italian-American Club and Ladies Auxiliary. Although not all of its families are Italian today, the link to Italy is the reason people come from as far away as Independence, Chubb Lake and the Gary and Lakeside neighborhoods to worship there. The Valentines moved to Alborn in 2003 but make the 40-mile drive to St. Peter’s every Sunday.

St. Mary’s Star of the Sea, 325 E. Third St., is the closest parish to St. Peter’s, but Campanario said members may spread out to a variety of churches because they are so geographically spread out.

She’s not sure of her own plans, but they aren’t likely to include weekly duties as an organist and choir director. “I think after 50 years I deserve a vacation,” Campanario said.

Valentine was baptized in St. Peter’s and had hoped to be buried from there, he said. He’s not yet thinking about where to go next.

“It would be very easy for me to attend a church in Meadowlands, which is eight miles away,” he said. “But we’re devoted to St. Peter’s, and it’s been a part of my life.” Duluth News Tribune