A work of art of the Word to be in Crookston

A work of art of the Word

Crookston monastery receives Saint John's Bible
The Sisters of St. Benedict here at “the Mount,” their quiet, leafy monastery overlooking the Red Lake River, are enthused over the rare and holy gift they are receiving from their Brothers Benedict from St. John’s Abbey — one of the limited Heritage Edition full-sized reproductions of the massive, seven-volume Saint John’s Bible, the first hand-made, illuminated Bible made in five centuries. 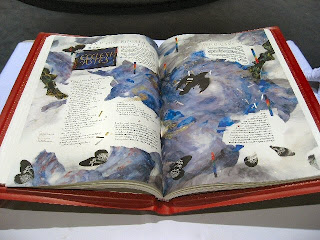 The Heritage Edition of the Saint John's Bible was given to the St. Benedict Monastery in Crookston by the brother of one of the sisters.

CROOKSTON — The Sisters of St. Benedict here at “the Mount,” their quiet, leafy monastery overlooking the Red Lake River, are enthused over the rare and holy gift they are receiving from their Brothers Benedict from St. John’s Abbey — one of the limited Heritage Edition full-sized reproductions of the massive, seven-volume Saint John’s Bible, the first hand-made, illuminated Bible made in five centuries.

“We think it’s a pretty big deal,” said Sister Denise Schonhardt, who handles public relations for the 80-some nuns who live, work and pray here in a community with traditions dating back 1,500 years.

The younger brother of one of the sisters is the donor behind the coming of the treasured set of over-sized leather-bound volumes filled with ornate script and gold-and-silver embossed art coming to the Mount St. Benedict Monastery.

“You better tell him about your brother,” Schonardt said to Sister Anita Whalen about a visitor’s questions.

Whalen’s brother, Dan Whalen, called her last spring and asked if the Mount would take one of the expensive Heritage Edition reproductions of the original Saint John’s Bible.

The answer was yes.

Four of the seven volumes arrived about two weeks ago, along with wooden furniture to house and display them, made by the monks of St. John’s.

The Whalens grew up in Argyle, Minn., and Dan graduated from Sacred Heart High School in East Grand Forks in 1965 before attending St. John’s and then the University of Minnesota.

“He got in early in the cellular phone business,” said Sister Anita, explaining her younger brother’s secular success.

Dan and Katherine Whalen live in Oakland, Calif., and are active benefactors, especially of Catholic institutions.

On Oct. 10, they will be at the Mount, along with St. John’s brothers and abbot, part of a ceremony in which the sisters officially receive the Bible.

Dan and Katherine Whalen gave a similar Heritage Edition Bible to their parish home in Oakland, the new Cathedral of Christ the Light.

Each Heritage Edition costs about $130,000, St. John’s officials said. If all 360 sets are bought, St. John’s share of the proceeds will pay not only for the $4.5 million cost of making the original Saint John’s Bible, but for much scholarship and building.

Brit Donald Jackson, who had been “the Queen’s calligrapher,” was commissioned by St. John’s in 1998 to make the first hand-written, illuminated Bible since Gutenberg invented the printing press in 1450. He gathered a team of 14 calligraphers and artists in Wales, who collaborated with a team of 100 or more theologians, scholars and artists from St. John’s.

The first words put down in 2000 by Jackson are not on paper but vellum — the thin parchment made from calfskin — with quill and natural, handmade inks, with gold leaf, as well as silver and platinum, were from the Gospel of St. John: “In the beginning was the Word … ”

It’s not complete, but Jackson plans to quill the final volume, on the New Testament Letters and Revelation, himself.

The original remains unbound because of the need to copy the pages for the Heritage Edition, Sister Anita said.

The Heritage Edition is a mixture of ancient craft and contemporary technology. Three Minnesota companies are doing the digital imaging of the original vellum pages, the gold and silver embossing and color management of the high-tech press needed.

In receiving this version of the Word, the Mount is in some lofty company.

The Vatican, St. Martin-in-the-Fields Cathedral in London, the Naples Art Museum in Italy, St. Catherine’s and St. Thomas universities in St. Paul, are among the Catholic institutions that have received a Heritage Edition of the Saint John’s Bible.

Pope Benedict XVI, in receiving his copy of what the Mount is getting, called it “a great work of art” and “a work for eternity.”

The sisters are thinking of getting kid gloves to handle the tomes.

“These are not illustrations,” said Sister Denise, leaving the turning of the art-filled pages to Prioress Lenora Paschke. “They are illuminations, designed to evoke prayer.”

At passages that have special meaning to their order, a little cross appears next to the verse, “for Benedictine eyes only,” Whalen said.

“There are so many delicious things in there, like the way the flora and fauna of Minnesota are featured,” Sister Anita said, pointing to a Monarch butterfly alighting on what looks to be a purple-bloomed thistle.

The Mississippi River is used to illumine a flood.

“And there are darling little things, if they left out a line,” Whalen said, pointing out how the calligraphers dealt with their own fallibility.

In the 30th chapter of Genesis, for example, an entire line was left out when the page was hand-written on the original vellum edition, in the story of Jacob’s wooing and working for Rachel.

Rather than throw out the entire, expensive page that took a day to complete, the calligrapher added the line in the bottom margin, then drew a fantastic bird flying up the left margin, pulling up by a silken rope the dropped words to the rightful spot.

It almost makes the mistakes more beautiful than perfection, the sisters said, glad their edition carries on the ornamental mistake and correction.

The Bible is in the New Revised Standard Version, a modern translation commonly used by Catholics and other Christian churches.

For all the old-fashioned technique and work, there are contemporary elements, some sure to be controversial perhaps.

The World Trade Center’s twin towers, on fire, show up, to illumine forgiveness in the gospel story of the Prodigal Son. And obviously, a decision that was made after work began in 2000.

For the creation story, the artists used a view of the earth taken from space.

The helix pattern of DNA shows up.

In the volume containing the Psalms, a sonogram image of the monks of St. John’s singing in their chapel is outlined in gold-lined design.

It’s inclusive, in line with the Benedictine rule on hospitality, Whalen said.

“There are allusions to Judaism in the illuminations, and to Islam,” she said. “All of us are people of the word.”

Adam and Eve are shown as black, a nod to modern anthropology putting human origins in Africa.

It’s a big book. Each volume is more than 2 feet high and, when opened, nearly 3 feet wide.

As Whalen shows visitors into the chapel where the rare Bible will be ceremonially received Oct. 10 from their Benedictine brothers, she said, “Here’s where we do most of our work. We pray here three times a day together, for everybody in the world.”

But the life of a Benedictine sister is not all contemplation and prayer. Sister Anita retired in early 2009 from 35 years as a dentist in Warren, Minn.

Now, the sisters are making plans. They will hold a sort of open house next spring to allow the public a look at their new old treasure.

The Saint John’s Bible Heritage Edition represents the values of the Benedictine order, of devotion to scripture and Christ, as well as to “the art of books,” and to ecumenical works, the sisters said.

“This gift has so many possibilities, and we are thinking how to use it,” said Prioress Lenora Paschke. “We know it’s more than a museum piece. It’s meant to be shared.” Grand Forks Herald