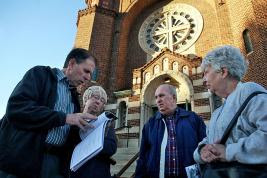 Parishioners of St. Andrew's Catholic Church in St. Paul look over the strategic plan, handed out at Saturday evening mass, which calls for their parish to merge with another, the Maternity of the Blessed Virgin.

Copy and paste the HTML below to embed this audio onto your web page.

St. Andrew's, one of the parishes being consolidated in an Archdiocese plan announced over the weekend, will hold its first meeting with the Archdiocese of Minneapolis and St. Paul a week from Monday to begin planning its transition.

About a hundred people showed up for 10:00 a.m. mass at the tidy Norman Gothic church of St. Andrew to hear about their merger with Maternity of the Blessed Virgin, a newer parish less than two miles away. The merger, slated for January 1, is part of a plan by the archdiocese to deal with a shortage of priests, a decline in church attendance in the core cities and an aging Catholic population.

The pastor of St. Andrew, Fr. Mark Juettner, told worshipers that he didn't have all the answers. News of the merger was woven into the welcome and prayers throughout the service.

Juettner emphasized the long relationship between St. Andrew and its receiving church, calling it a "daughter church." Maternity of the Blessed Virgin was carved out of St. Andrew's parish after World War II. The two have shared a school for twenty years.

In an interview after mass, he described what he had tried to convey in his homily.

"The message is one of hope, one of courage facing the future," Juettner said, adding that his parishoners need to develop a vision of the church that is larger than just one's own parish.

"Even though that is the base by which most people identify themselves in their Catholic life," he said. "Hopefully they'll be able to cling to the richness of their past, and bring a new wave of enthusiasm and interest in the parish that will result from the merger."

Juettner's own future with the new parish is unclear. He's been with St. Andrew only a year, though he's been a priest for more than three decades.

In his homily, Juettner talked about going to visit an elderly member of his parish in the hospital. Mary Joyce told him what had drawn her to the neighborhood more than 50 years ago wasn't the beauty of Como Lake, Como Park, the zoo or the conservatory. As wonderful as they were, she said, St. Andrew's was what drew her.

She told the pastor she had a good view of the steeple from her house.

"I have a sense of the nearness of the church," she said.

"That was the Catholic answer, Mary," he told her. Outside the church, Joyce held her niece's arm as she pointed to her house.

"I live right over here, just down a few doors and up the block," she said. The merged parish will be different, she said, adding that St. Andrews was her "whole life."

Others aren't as easily persuaded to follow the Archbishop's strategic plan. Nyals Kittel is a 46-year-member of St. Andrew.

"No, I think I'll be going to Assumption. It's downtown, but once I get in the car, what's the difference? I mean I live only 3 doors up. You know, it's a hell of a loss," Kittel said.

Newer members of St. Andrew were also unsure about where they will go.

Rita Gahr joined the church a year and a half ago.

"It was a big decision to come here and it'll be another decision to decide where I go," Gahr said. "It's just heartbreaking. I hate to see it happen. My seven children went to grade school here."

Bob Kieger, 81, has been a parishioner at St. Andrew for 75 years. Like many people, he's connected to the church through family baptisms, weddings, school for his kids.

The closing of the church leaves one piece of unfinished business for him.

"Father Juettner's had quite a few funerals when he's been here and I had hoped to be buried from St. Andrews in the next few years myself," Kieger said.

Members from the parish outreach team of the Archdiocese were on hand after mass for those who wanted to discuss the changes. Affected parishes have 10 days to appeal the Archbishop's decision, but according to Father Juettner and parishioners, it seems unlikely St. Andrew will mount a fight. Minnesota Public Radio

Oh - I see Cathy had her tight curled blond wig on in the top photo.