Let There Be A Coadjutor: John Clayton Nienstedt of Detroit and New Ulm 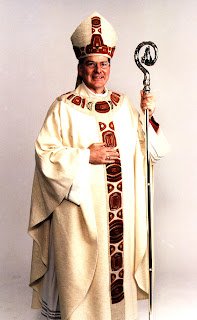 (My kind of Crosier!)
As good as a Motu Proprio! But we could use that too.

More to come, but let's say right now that he is on the "Bishops with Spine" list!

Bishop John Clayton Nienstedt was born March 18, 1947, in Detroit, Michigan. He is the son of Jack and Betty Nienstedt of Harrison Township and the second oldest in a family of six children. He has two brothers and three sisters. His parents are members of St. Paul Parish, Grosse Points Farms, and St. Hubert Parish, Harrison Township.

His doctoral topic was “Human Life in a Test-tube; the Moral Dimension of In Vitro Fertilization and Embryo
Transfer.” [If that isn't one of the most important issues facing the Church today, I'll be a "monkey's uncle."]

In 1994, Bishop Nienstedt was appointed Pastor of the Shrine of the Little Flower Parish,

Royal Oak, Michigan. Prior to that, he served for six years as Rector and President of Sacred Heart Major Seminary in Detroit, Michigan.

On June 12, 2001 Pope John Paul II named Bishop Nienstedt the Third Bishop of the Diocese of New Ulm, Minnesota. He was installed on August 6, 2001.

On April 24, 2007, Pope Benedict XVI appointed Bishop John C. Nienstedt as Coadjutor Archbishop of the Archdiocese of Saint Paul and Minneapolis and as the Apostolic Administrator of the Diocese of New Ulm. [I would say that this a rather current biography; somebody must have been up all night!]

September 16, 1992 “How to be a Better Team Leader,” Detroit, Michigan
May 17, 1993 “Strategic Planning: A Vision for the Future,” Chicago, Illinois
March 8-19, 1998 “Jewish-Catholic Interfaith Journey to Israel and Rome,” Jerusalem and Rome

Ray, I have absolutely nothing to say except, see - just as I foretold - I told everyone it would be him.
LOL!

Ok, now everyone pray for the likes of this guy for Bishop Harrington's replacement in the Winona Diocese. Harrington is a good guy, I've heard him preach several times and have never heard one questionable thing come out of his mouth. He's good, but we need a saintly bishop here, seriously - the spine of steel type.

Aaron, er, Terry: You did? Wonder what Aquila's doing these days..

I'd give real money to read/hear his presentations on Richard Rohr and Robert Bly.

Yes, Sanctus Belle, I'm still praying for the Diocese of Winona. I'm now praying for our brothers and sisters in the New Ulm Diocese too. They will need a new leader now.

You mean that Richard Rohr may not be able to speak at St. Thomas anymore? That may be the 2nd best news I have heard all day.

I think that Bp. Nienstedt wrote the letter on Marriage and Families that was signed by all the Minnesota Bishops - December 2005. That letter impressed me.

That Robert Bly thingy caught my eye, too. I was wondering what that presentation might sound like? I don't know much of anything about him except that everytime I've seen him (RB) on PBS or something, I've thought, "Who's that pompous dork?" and "What a weenie" I know that isn't very nice, but that's what I thought at those times. Is he a poet or something?

The Dioceses of Crookston, MN, and Superior, WI, in our neighborhood also need new Bishops also due to retirement.

So there big changes all over the place up here in the Northland, what with new Bishops in Sioux Falls, SD, and Sioux City, IA, a fairly new one in LaCrosse, WI, our brand new one in St Paul-Mpls and vacancies in New Ulm, Crookston, and Superior.

Bishop Dennis Schnurr in Duluth, Bishop Samuel Aquila in Fargo, ND, and Archbishop Jerome Hanus of Dubuque, IA, are our only experienced shepherds.