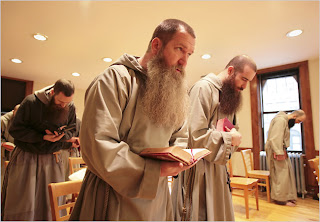 .
The Franciscan Friars of the Renewal of the South Bronx, as Father Groeschel calls them, have got a magnificent article in the NY Times yesterday. Click on this link to see some great photos of their life as a slide show. They begin by featuring their monthly "holy hour of prayer and song and ensuing music festival are part of an event called Catholic Underground" that even features punk music that is appealing to young Catholic students and professionals.

"...In 1987, eight Capuchins once again felt the call to renew St. Francis’s vision. With $800 and the approval of Cardinal John O’Connor, the archbishop of New York, they set out to yet again start afresh.

Cardinal O’Connor lent the friars a neglected Polish parish on East 156th Street and Melrose Avenue, which they christened St. Crispin Friary. There, they met all their needs for food and other staples by begging, and they began pursuing their mission on crime-infested streets among drug addicts and burned-out buildings. One of their first acts was to establish an 18-bed shelter, the St. Padre Pio Shelter for Homeless Men, which adjoins the friary and has been open every night since that first Christmas.

The friars devote themselves to evangelizing and fostering a strong prayer and community life while renewing their dedication to poverty, chastity and obedience. Or as the friars like to joke, “No bling-bling, no sweet thing, Christ is King.”
[...snip]
This year, 15 men with an average age of 26 entered the Friars of the Renewal as postulants, or candidates, among them a veteran of the Iraq war and a graduate of Cornell.

“I am always impressed that these are young men of great ability, and usually from backgrounds of academic accomplishment,” said the Rev. Richard John Neuhaus, who teaches the friars at St. Joseph’s Seminary in Dunwoodie, a section of Yonkers. “They could have done a thousand other things, but they have very deliberately chosen the high adventure of being a Friar of the Renewal.”
[...snip] Read much more Here!