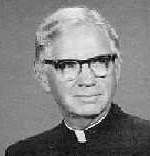 Monsignor Richard J. Schuler, Pastor Emeritus of The Church of Saint Agnes, died peacefully in his sleep on Friday April 20, 2007.
Wake
A wake will be held Monday, April 23, at 3:00 PM at the Church of St. Agnes. It will conclude at 9:00 PM with sung Latin Vespers.
Funeral Mass
The Funeral Mass for Monsignor Richard J. Schuler will be celebrated at 7:00 PM on Tuesday April 24, 2007 at The Church of Saint Agnes, 548 Lafond Ave. St. Paul, MN. Members of The Twin City Catholic Chorale will be singing W.A. Mozart's Requiem Mass, along with an orchestral accompaniment.

He leaves a great legacy which will endure.

"Well done, good and faithful servant… enter into the joy of your master." (cf. Matthew 25:23)

Monsignor Richard J. Schuler, Pastor Emeritus of The Church of Saint Agnes, died peacefully in his sleep on Friday April 20, 2007. We at Saint Agnes join countless others throughout the world in offering our prayers for the repose of his soul, and in gratitude to Almighty God for the gift of his life.

Monsignor was in residence at the North Memorial Residential Hospice in Brooklyn Center at the time of his death. Monsignor Schuler served as Pastor at Saint Agnes for thirty-two years, from 1969-2001, and was the founding director of The Twin Cities Catholic Chorale in 1956.

Terry at Abbey-Roads2 has a great photo (swiped above) and a bio of the Monsignor.
Posted by Unknown at 11:36 AM