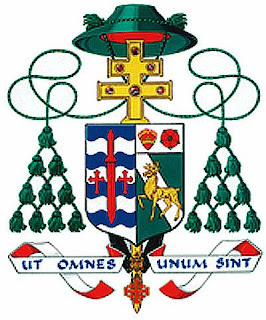 Information for this article was provided by the Communications Office of the archdiocese based on descriptions provided by Deacon Paul J. Sullivan of the Diocese of Providence, R.I., and by the artist who designed the new crest, James-Charles Noonan, Jr.

For his personal coat of arms, Archbishop John Nienstedt had selected a design that reflects his life as a priest and as a bishop. It bears the phrase “Ut Omnes Unum Sint.” This phrase is taken from the Gospel of John (17:21). In choosing this phrase, the archbishop recalls the deep desire on the part of the Lord Jesus for unity among his disciples, unity among all believers, unity among nations, “That they all may be one.”

This process is known as the impalement of arms, a privilege reserved for the diocesan bishop and which is symbolic of his marriage to the see that he governs. This custom of uniting the two coats of arms came into the church more than 800 years ago. It has been a custom of bishops in the United States for 200 years.

Also new to Archbishop Nienstedt’s design is the addition of four tassels, known as “fiocchi,” that fall from his heraldic hat. Bishops are permitted six tassels, falling on either side of the hat, but archbishops are permitted 10 fiocchi. The interior of the hat is worked in blood red, a custom of long standing in the church that represents the spiritual suffering of those being called to the office of bishop.

The green field behind the gold stag on the shield honors the Irish heritage of the archbishop’s maternal family, the Kennedys. The diagonal white bar represents the German heritage of his father. By use of these symbols, Archbishop Nienstedt honors his parents, John and Elizabeth (Kennedy) Nienstedt.

The gold stag over these symbols is taken from the coat of arms of John Cardinal Dearden, whom Archbishop Nienstedt had the honor to serve as secretary and who served as his mentor.

The upper portion of the shield, called a “chief,” has a gold crowned red heart representing the Sacred Heart of Jesus.

Within the shield proper, the sword is meant to represent the Roman soldier’s sword that would have been used in the Roman Empire at the time of Christ to behead St. Paul.

Behind the coat of arms of all bishops is a processional cross. The cross proper appears above the shield and at the base of the staff below it. Archbishops may bear this archiepiscopal cross which has a shorter cross arm included.

In the new design of Archbishop Nienstedt’s coat of arms, six stones adorn the cross. Each of these stones is of an agate known as Lake Superior Agate, selected as a symbolic regional link to the see of St. Paul and Minne­apolis. They vary in color, tone and hue, with a predominance of reds and oranges, reflecting the six types used in the formal painting of the archiepiscopal coat of arms.

At the base of the cross is an insignia reflecting the archbishop’s rank as a knight of the Equestrian Order of the Holy Sepulcher of Jerusalem, a papal order of knighthood. Catholic Spirit

That is cool. devotion to the Sacred Heart and St. Therese. No wonder he is so holy.

Wow! I just noticed Wausau, Wisconsin arrived on your blog. That's it!

Do you suppose he's looking for ideas for his own coat of arms? Archbishop Fulton Sheen became Bishop and Archbishop because of his skill in the media.

As my heroine, Judy Tenuta would say, "It could happen."