Rev. Lee Piché, a Twin Cities native, is named as the archdiocese's second in command 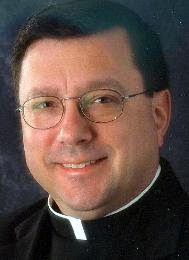 The Rev. Lee Piché, a Minnesota native considered one of the most respected figures in the Archdiocese of St. Paul and Minneapolis, was named auxiliary bishop today. As is custom, the announcement was made by the Vatican at noon (5 a.m. CDT).

The position, in which he will serve as the right-hand man to Archbishop John Nienstedt, is considered a stepping stone to becoming a full bishop. Piché, 51, clearly is on the church's fast-track, having been promoted to moderator of the curia and vicar general just a year ago.

"But I'm not worrying about that [becoming a bishop] right now," he said. "I'm hoping to be here a good amount of time. There is a lot of work to be done here, and I'm excited about doing it."

He is the son of LeRoy and Cecilia Piché of New Brighton. He attended St. Paul Seminary, was ordained in 1984 and has served at a number of local parishes, including the Church of All Saints in Lakeville and a current part-time position (which he will have to give up) at St. Andrews Catholic Church in St. Paul.

[He has taught on the faculty of the University of St. Thomas in St. Paul as well as at St. Thomas Academy in Mendota Heights. He was ordained a priest of the archdiocese in 1984, and his first assignment was as parochial vicar at St. Mark in St. Paul. Catholic Spirit]

Being local is going to be an advantage, he said.

"Watching Archbishop Neinstedt [a native of Detroit] come in here and immerse himself in the local community, I couldn't help but notice that he was always needing maps," he said. "I don't need to ask for directions. I know the routes, I know the customs, I know the people."

He will be installed at an ordination and consecration ceremony June 29, but the job's duties are likely to start before that.