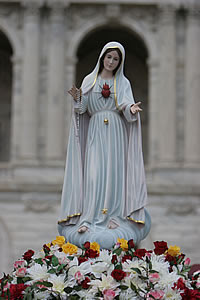 The beautiful new statue May 3 at the 62nd annual Family May Day Rosary Procession in St. Paul [Click HERE] that led the march of well over 1,000 down John Ireland Boulevard from the Capitol to the Cathedral. Catholics can thank Connie Schneider of St. John in St. Paul and her son, Shawn, who made the new statue of the Sorrowful and Immaculate Heart of Mary.

They recently completed the 50-inch statue, which they call the Sorrowful and Immaculate Heart of Mary, and offered it for this year’s procession that began at the State Capitol and ended at the Cathedral of St. Paul, where it was blessed by Archbishop John Nienstedt and crowned.

“The one [statue] that they used for many years was made out of plaster; solid plaster is very heavy,” Connie Schneider said. “We decided to have a new one that wasn’t that heavy.”

About three months ago, she started remodeling a statue that originally came from Portugal. It resembles one that currently sits in St. Catherine the Great Cathedral in St. Petersburg, Russia. Schneider refurbished the body, which was cracked, and remodeled the face. Her son did the painting with an airbrush. She has made other statues of Mary, but this is the first one used in the procession.

“She’s just beautiful, it means a lot to me,” Schneider said of the statue. “It’s my hope . . . that we’ll have it available if a family wants it to come [to its parish].”

Those interested in borrowing the statue for use in their parish can call Schneider at (651) 776-0363. Catholic Spirit
Posted by Unknown at 2:09 PM