From St. Paul to Vladisvostok - The Sisters in Jesus the Lord

A word from Vladivostok

Hilary White, one of the key writers for the fabulous Canadian LifeSiteNews.com also has been a blogger for many years. Today, she profiles the activities of St. Paul religious community, the Sisters in Jesus the Lord: 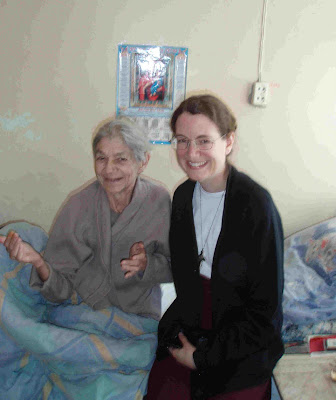 Some time ago, I became interested in the work being done by this little society of missionaries to Russia. They're the real thing. Catholic missionaries whose first priority is to bring the light of the Catholic Faith, through charitable works, to the suffering poor and sick in the farthest-flung end of Russia.

They've persevered through a lot: opposition from a former bishop, lack of funds, obstruction from Russian authorities who hate Catholics, language barriers and the sheer mountain - mountain range - of work to be done. They run many programmes, including scouts for the kids, post-abortion counselling for the many women who have had, usually, many abortions, a soup kitchen and drop-in centre for elderly people, and visiting hospitals.

Just got this latest message from one of the sisters whom I met several years ago at a conference on the religious life in Chicago. If you have a few spare dollars or Euros or pounds, consider sending it to this very worthy cause.

Monday was our first visit to the hospice here in Vladivostok. It is free, and in terrible condition. Excellent medical help is available now if you can pay for it, but the hospice is the alternative for those who cannot pay. There are about forty patients there, mostly elderly, but some are there trying to recuperate from accidents, and a few are even mentally ill people in their 30's or 40's.

Thankfully, it was a sunny day, about 60 degrees, so the staff let us wheel some people outside in wheelchairs. They only own three wheelchairs, and the third fell apart when they tried it, so only two elderly people can go outside at a time. One woman, Nina, told me that she had not been outside for 3 or four months, due to the weather and probably lack of available staff. She was so grateful to be in the sun! She came out all bundled up in blankets, a furry hood and several head scarfs, but soon removed at least the hood. She told me that she used to have a large house (6 rooms) with a large vegetable garden, and that for over thirty years she had never been sick. But then she fell and hurt her leg, and now she's in the hospice. Another woman, Evgenia Semenova, crossed herself several times on the way outside. I asked her if she's a believer, and she said, yes, Orthodox.

She asked me what Church I belong to, and wrinkled her nose a little when I said "Catholic". She lamented that there are so many different churches when there is only one God, which I agreed with, but then she said that the Catholic Church was founded in the 6th century, after the Muslims! She says that she's studied the
Bible for a long time and that she didn't believe that I know much about it, because you have to read it every day. But she, too, enjoyed the sun and when we asked if we could take her picture, she took off her head scarf and fluffed out her grey curls and asked if she wasn't beautiful? :)I hope to send a few pictures by email soon.

On Wednesday, we went back to the hospice to help feed the patients. To get there from the church,which is on a steep hill, first you go down about 200 or so uneven steps and around the corner to the bus stop. You ride about 10 minutes or so, and then walk across train tracks, around the corner, and up another steep hill, past a children's clinic and a hospital--about 35 minutes in all, which isn't bad timing-wise.

To feed the patients, we sat next to them on their beds, because chairs are scarce. One woman asked me to open the window, and I eventually understood what she meant through her motions, because I didn't understand all the words. She had me stand on her bed to get to the window sill, because the little window was out of reach. The women were much more talkative than the men, and were curious when I told them that I want to be a nun.

One woman who was just admitted on Monday told me that she used to always attend the concerts at the Catholic Church in town, and that she greatly misses the beautiful music. She was very happy when I told her that I'm going to bring my harp soon to the hospice! She said she'll be waiting. I hope to go again tomorrow. We just wanted to make sure that we knew the way well before carrying the harp across town.