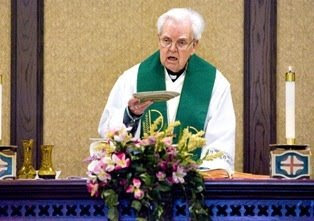 .
Msgr. Patrick McDowell, 81, a longtime downtown Duluth priest who oversaw three inner-city parishes and who was an advocate of the poor, died Tuesday at St. Luke’s Hospital.

The rotund, affable priest was the parish vicar at Center City Catholic Churches in Duluth that included St. Mary Star of the Sea, St. Peter’s and Our Lady of Mercy. He also was pastor of Duluth’s St. Benedict’s Parish in Kenwood and later served at parishes in Virginia and Cook.

"Father McDowell", as we called him in the olden days, when he taught at Duluth Cathedral's High School, was a wonderful man with the greatest head of hair known to mankind. He didn't know me, but I was privileged to know him.

Father Pat McDowell was legendary for his generosity

For nearly 50 years, he was a widely known advocate for the poor, a good listener and a beloved priest in Duluth.

The Rev. Patrick Melville McDowell was more than just the leader of the flock at Catholic parishes in Duluth and northern Minnesota. To many, he was a true disciple of Jesus, an advocate for the poor and downtrodden who often used his own resources to help those in need.

"He was a kind man who gave money to street people," said Shirley Baker, who worked with McDowell at St. Mary Star of the Sea Church in Duluth. "He wanted to serve God, and he made anybody who had contact with him feel special."

He was born in Hibbing, Minn., and attended the Crosier Seminary in Onamia, Minn., Nazareth Hall Prep School in Roseville and St. Paul Seminary. He was ordained in 1954 and began work with the Diocese of Duluth.

During his 50 years of ministry, McDowell served parishes in Virginia, Cook and Greaney in northern Minnesota, and spent much of the 1990s in Duluth, where he oversaw congregations in the Hillside neighborhood.

He was instrumental in forming the Helping Hands Ministry while serving the Center City Parishes of St. Mary Star of the Sea, St. Peter's and Our Lady of Mercy. In that ministry he provided gift certificates for food or department stores to those who knocked on the door, or subsidies to help them pay their rent or gas bills, Baker said.

"He was an incredibly generous person to those in poverty," said St. Louis County Commissioner Steve O'Neil. "He was like a legend. People would line up to talk to him, and while many needed material things, they'd also ask him spiritual questions. He was a good listener, and he was not judgmental."

McDowell also was instrumental in creating the Holy Innocents Chapel at St. Mary's, a place where people can come and pray 24 hours. For his benevolent efforts, he was named monsignor by Pope John Paul II in July 1997.