The Cistercians in Norway: the Renewal of Monastic Life (from Abbey Roads)

.
Terry of Abbey Roads has posted a wonderful article on how Cistercian (Trappist) nuns from Dubuque have created an abbey in Norway. Sort of like missionary times, this time from the New World to the Old World. 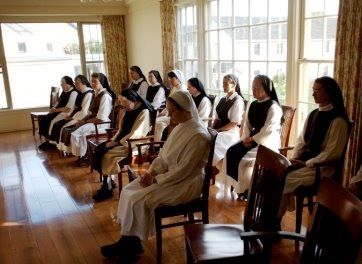 .
Ten years ago, Our Lady of Mississippi Abbey outside of Dubuque, Iowa made a foundation in Norway called Tautra Mariakloster. I met the abbess at Tautra many years ago while I was at New Melleray and once again when I was asked to paint an icon of the Descent Into Hell for their office of vigils. I have always admired these nuns and their fidelity to the Rule of St. Benedict. The Trappistines were actually the first to return Cistercian monasticism to Norway.
.
This is how the nuns describe it on their website:
.
Not very far from the ruins of a medieval Cistercian monastery, on the island of Tautra in central Norway, seven Cistercians nuns, with the help and support of countless others, have established themselves and have built a new permanent monastery. Most of the founders came from Mississippi Abbey, in Dubuque, Iowa, USA, in 1999, along with two Norwegians, one from the monastery of Wrentham (USA) and one from Laval (France). Since that time, two of the founders returned to their monasteries and a few more joined us, as well as young women who are in the process of entering our monastery from various countries. Read the rest of the post at Abbey Roads