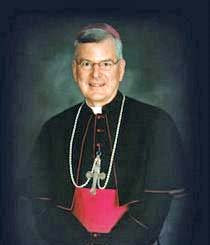 .
Archbishop John C. Nienstedt of the Archdiocese of St. Paul-Minneapolis has responded to a letter by Brian McNeill, organizer of Rainbow Sash Alliance USA, in which McNeill notified the archbishop that - as in previous years - lesbian, gay, bisexual, and transgender (LGBT) Catholics and their allies would be present wearing rainbow sashes at this year’s Pentecost Sunday noon Mass at the Cathedral of St. Paul

We cannot repeat too often that we attend Mass on Pentecost to celebrate who we are, not to protest. We participate in Mass in the same way we do all the other days of the year. But on Pentecost we come out of the closet as lgbt Catholics, family and friends to remind our fellow Catholics that we too are part of God’s loving family.

McNeill’s letter to the archbishop also stressed that the rainbow sash represents and invites dialogue between LGBT Catholics and the Roman Catholic hierarchy.

I write to acknowledge your letter of May 10, 2009, alerting me to the fact that you and some fellow protesters will be wearing rainbow sashes at the noon Mass on Pentecost in the Cathedral of St. Paul. I ask yo to refrain from such a public act of dissent, especially as it so clearly shows disrespect and irreverence for the Body and Blood of Jesus Christ.

Anyone wearing a “rainbow sash” will not be permitted to receive Holy Communion, since their dissent is a sign that they have publicly broken communion with the Church’s teaching. I also ask that those not wearing the sashes refrain from sharing the Holy Eucharist with those who do. Such an action is unbecoming the dignity of the sacrament.

With regard to the dialogue you request, it would first be essential that you state clearly that you hold with the conviction all that the Church teaches on matters of human sexuality. If you do not believe, then there cannot be dialogue, but only debate. The truths of our faith are not open to debate.

Again, I hope you will see how disruptive your planned protest will be for those who will gather on Pentecost to pray. I ask you to refrain from being the cause of such disruption.

Sincerely your in Christ,

The Most Reverend John C. Nienstedt
Archbishop of Saint Paul and Minneapolis


Recommended Off-site Links:
Rainbow Sash Wearers Prohibited from Receiving Communion - The Catholic Spirit, May 27, 2009.
“Take, All of You, and Eat” – Communion and the Rainbow Sash - The Wild Reed, May 28, 2007.

The Progressive Catholic Voice
Posted by Unknown at 5:38 PM

Thank God for our Roman Catholic Archbishop! God bless him.

God bless H.E. but I'm sure this group will no more listen to him than they listen to or actually read Catholic teachings anyway.

I would agree with you. I think that they learned public relations from a couple of the parish councils around here. That "courtesy letter" to H.E. and feigned horror upon getting the reply was just another way to get their name in the paper.

The Cathedral Usher Crew has been crafted into the Special Forces of that ministry. They really know what they are doing.

Last year about 50 dissidents showed up. There were a couple of minor incidents which no doubt they consider 'victories.' Then after Mass they go outside have a group hug/photo op before they leave for their labyrinth walk or Summer Solstice Planning Meeting.

..or head for Cossetta's and try to avoid the mysterious fern that keeps moving around...

Getting those ferns up those stairs to the second floor at Cosetta's is very difficult to do unobstrusively.