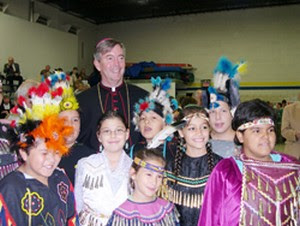 SUPERIOR -- Bishop Peter F. Christensen was installed as the 10th bishop of Superior on Sept. 23. But the crowd who packed the Cathedral of Christ the King on this auspicious day made the celebration seem like a homecoming, greeting and embracing him as a son.

It was the kind of day that people in the north are so fond of: sunny and warm--but not too warm--breezy, but not enough to warrant protection. And everyone who planned and anticipated the event was certain that it was not going to rain. It just would not happen.

Rain would have made the rite difficult as it began outside on the plaza. The visiting bishops, diocesan priests and deacons lined up with an honor guard of more than 50 Knights of Columbus.

Two children, American Indian drummers from St. Francis Solanus School on the Lac Courte Oreilles Reservation under the care of their teacher Sr. Felissa Zander, SSSF, signaled the start of the procession and 10 dancers led the new bishop from the rectory to the massive doors of the cathedral.

There he knocked three times. He was asking to be admitted. During his ordination ceremony a week earlier in St. Paul, Minn., a 13-year-old student at Christensen's former parish school, Nativity of Our Lord, said that he had explained this part of the unique liturgy during a visit to her classroom.

"He's worried," she said. "Will they open the door for him?"

Yes, it was opened and later during Christensen's first homily in his new home parish, he introduced himself simply: "It's good to be here."

About 900 people filled the cathedral and another 100 were seated in front of a video screen downstairs. At a reception afterwards many waited in line in the cathedral school gymnasium to personally greet their new bishop and introduce themselves.

The prioress of St. Scholastica Monastery in Duluth, Minn., Sr. Lois Eckes, OSB, told Christensen that the sisters would like him to be their guest at the monastery when he is "settled" in his new job.

Rice Lake residents Deacon Ron and Karen Novotny presented the former Minnesota resident with their (well-intentioned) idea of a welcome-to-Wisconsin basket of goodies: a Packer cap and paraphernalia.

Many in the crowd, like Superior resident Char Bachlund, were excited to witness the installation of the new bishop.

"It's so wonderful to be a Catholic," Bachlund said. "That's how (the ceremony) made me feel. It was almost like being in Rome."

She has never been to Rome but imagines that ceremonies there could not be any grander than this one at the cathedral where she received her first Communion, was confirmed and married her husband Ramon.

"I enjoyed the service," she said. "We're so lucky to have him.

"This reminds you how great it is to be Catholic," he said. "The ritual, the assembled priests, the vestments. This just really takes it back to our traditions."

Blank was able to share a few words with Christensen about his particular concern: the diocesan schools.

"I told him that the parents of all the Catholic students are praying for you," Blank said. "The schools are hurting. Enrollments are declining."

Christensen's interaction with Bishop Raphael M. Fliss during the ceremony was the "most touching" moment of the day for Sr. Virginia Schwartz, OSM. She is the parish director of St. Ann Parish in Cable and thought that the new bishop showed himself to be "caring and sensitive" in thanking Fliss and then embracing him. It was a small action that meant a lot.

Schwartz also said she liked Christensen's easy handling of some minor blips during the liturgy: dealing with annoying feedback in the sound system and then later forgetting to pick up his crosier.

Most of the attendees were meeting Christensen for the first time, but some at the installation held long histories with him.

A number of Nativity parishioners were in Superior to see their pastor off, among them were, Lucy and Jerry Alfveby. However, they didn't have tickets, which were distributed equally to all parishes in the diocese to manage the limited number of seats.

"I asked Fr. Peter about it," Alfveby said. He told the couple not to worry. "'You're family,' he said."

Another couple not meeting Christensen for the first time on Sunday were Patrick and Diane Ricci.

"We met Bishop Peter 17 years ago in our home when he came to interview Andy for the seminary," Patrick said.

"Andy" is Fr. Andrew Ricci, their son who is now the pastor of St. Francis de Sales and also the director of vocations for the diocese.

The installation drew at least one couple that thinks the naming of a new bishop will close a difficult chapter in the life of the diocese.

Allan Jirele and his wife Mary, members of Sacred Hearts of Jesus and Mary, Crescent Lake, felt that the Pope Benedict XVI's choice of Christensen heralds significant changes for the diocese and a separation from past abuse scandals.

"This new bishop will put a renewed face on Catholicism," he said.

While Jirele welcomes moving forward he also hopes Christensen will take the diocese somewhat back to what once was.

"We are students of our faith, Mary and I," Jirele said. "The cathechesis was lost between Vatican II and today. The church has realized that we have an adult population who does not know its faith."

Then alluding to Christensen's background as the rector of Saint John Vianney College Seminary, Jirele talked about his hope for more seminarians in the future.

"We've got a huge priest shortage," he said. "(Christensen's) gift to the church will be (more) vocations."

Deacon Joseph Wesley from St. Francis de Sales in Spooner stood in line with his wife Ruth to greet and welcome their new bishop. Smiling afterwards he summed up the feelings of many present.

"He's one of us," Wesley said, "one of the people." Superior Catholic Herald

He just looks as if he has always been a bishop!