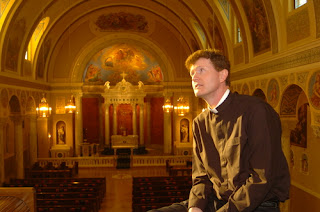 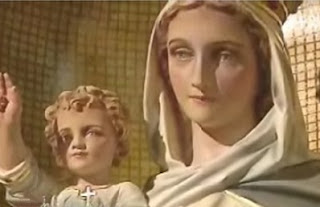 .
The Rev. Paul van de Crommert admires the restoration work at St. Aloysius Catholic Church in Olivia (Diocese of New Ulm). Three bishops, more than 30 priests and up to 600 other guests are expected to attend the church’s dedication ceremony during a Mass Sunday. The restoration of the storied church took seven years.

Eight decades after the Rev. Henry Pomije led his Catholic parish in Olivia to build the church to be known as the “prairie shrine of art,” things are again as they were, and probably quite a bit better.

Three bishops, 30 to 35 priests, and up to 600 other guests are expected to join as St. Aloysius Catholic Church in Olivia dedicates its restored church on Sunday.

The 3 p.m. Mass will consecrate a new altar for the church, and mark the completion of seven years of work.

Some have described it as “divinely inspired” work. Looking about the bright, colorful and cathedral like surroundings of the restored church, the Rev. Paul van de Crommert puts it this way: “God’s hand is in it.”

The Olivia parish invested $1.2 million in the restoration. Almost all of the money was raised in donations. Van de Crommert said that only about 10 to 12 percent of the project needs to be financed.

There are no more than 480 families in the parish. The contributions have come largely from families who are middle to lower middle class in their economic earnings, according to the pastor.

That is not unlike how it was in 1927, when Pomije led a parish comprised of the hard working sons and daughters of German and Bohemian immigrants to the area. Pomije had traveled to Italy and was inspired by the art and architecture of Rome.

He convinced the rural Olivia parish to build a church of Italian or Romanesque architecture, complete with marble pillars and original artwork of Gonippo Raggi, renowned at the time for his religious works.

The work began in 1927 continued through the Depression years and into the 1940s. It was apparent that Pomije ran out of funds and had to take short cuts at times: Those omissions have now been corrected.

Van de Crommert said he had always been impressed by the beauty of the Olivia church, but he arrived as its pastor in 2000 without any expectations of leading an effort to restore its beauty. He and church members were initially concerned with fixing weather-damaged windows and doing other essential maintenance to preserve the art inside. That art — huge canvas renditions of Biblical scenes — were water and soot damaged from the years, but are now restored to their original splendor.

The restoration involved every aspect of the church, from restoring its stained glass windows and statuary to creating new wrought iron ornaments and transforming the Baptistry.

“You can’t help but believe in God that humanity has the power to create something like this,” said van de Crommert of the beauty found in the church.

He cannot easily explain how a small, rural parish was motivated to take on an undertaking so large as this. But he said the parish has been very united, despite the warnings he had received from other priests that nothing divides a parish like a building project.

Like the priest who inspired the parish 80 years ago, van de Crommert has put his own heart into the project. The parish contracted with the architect Angelo Gherardi— renowned for his work for two popes — to design the restoration. But Gherardi is expected to tell those who gather to celebrate the church on Sunday that his role was merely to “clean up” the drawings of Van de Crommert.

Van de Crommert said the importance of the restoration has more to do with faith than architecture. Whether it’s because of the unity fostered by the project or the sheer beauty of the surroundings, church attendance and participation has steadily grown through the seven years of the project, according to the priest. The parish has been able to welcome new members, and has reached out to the growing number of Latino residents of the region, he added.

If Pomije were able to come back to see the church today, “I think he’d be happy,” said van de Crommert. West Central Tribune

KSTP-5 On the Road Video 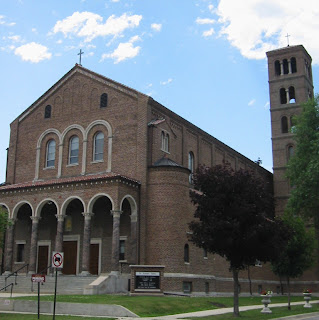 I watched a piece on the Church on channel 5 last night. Very beautiful.

Here's the link to the Channel 5 piece - it's over on the right (at first I thought it was an ad).