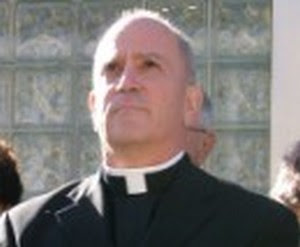 .
Facing the busy street in front of the state of North Dakota’s only abortion facility this morning, Most Rev. Samuel J. Aquila, Bishop of the Catholic Diocese of Fargo, led the prayers of the rosary. The dozen or so men and women who joined him drew close to hear his words above the sounds of the traffic and occasional nearby trains.

The bishop had scheduled an hour of prayer at the abortion facility as part of the 40 Days for Life North Dakota campaign which began Wednesday, Sept. 26. The campaign includes prayer and fasting, community outreach and a 40-day, 24-hours-a-day prayer vigil in front of the Red River Women’s Clinic.

40 Days for Life is a nationwide, ecumenical effort to increase awareness about abortion, save the lives of unborn children and bring healing to those who have had abortions, those who have encouraged abortions, and those who perform and assist with abortions. The campaign is being undertaken simultaneously Sept. 26 through Nov. 4 in 89 cities in 33 states.

In an Aug. 28 letter to priests of the Diocese of Fargo, Bishop Aquila asked the priests to schedule an hour of prayer in front of the abortion facility sometime during the 40 days and to encourage their parishioners to do the same.

Forty days of round-the-clock prayer equals 960 hour-long prayer slots to fill. Today, on only the third day of the campaign, less than 250 of those hours remain open. One or more people are already scheduled to pray during the other 710 hours.

People of many faith backgrounds are responding to the call to prayer. And dozens who have not officially signed up to pray are dropping by to join in prayer. One woman who prayed on Sept. 27 wrote of her experience of a man who stopped by. “He told me how he had been involved in an abortion decision many years ago, and how he had never prayed outside a clinic before. He stayed for over an hour.”

Abortions typically take place one day a week at the Fargo facility, with the number of children killed through abortion at the facility in 2006 totaling more than 1,200. At least 25 women entered the facility on Sept. 26. The following day, one of those women told a 40 Days participant that she had entered, but then changed her mind. The campaign web site notes, “She entered, but, while inside, decided to allow her baby to continue to live. The young mother left the abortion facility with her baby still cradled within her womb.” Catholic News Agency

I hope the priests here were urged to do the same in front of Planned Parenthood on Ford Parkway.