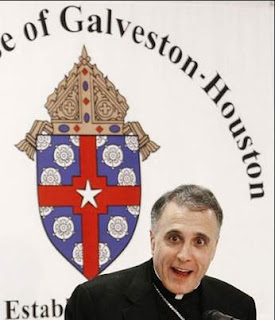 .
Catholics in the Sioux City diocese knew Daniel N. DiNardo, bishop there from 1998 to 2004, was destined for higher leadership roles in the world's largest church.

DiNardo, now archbishop of the Diocese of Galveston-Houston, was named a cardinal today.

Pope Benedict XVI named 23 new cardinals, tapping two Americans, the Chaldean patriarch of Baghdad, and archbishops from four continents to join the elite ranks of the "princes" of the Roman Catholic Church.

"Meeting him and knowing how he was, I knew he would be more than the bishop of Sioux City, Iowa."

DiNardo's nomination was something of a surprise and appeared to be an indication of Benedict's desire to reach out to the large Latino community in Texas. He was only named archbishop last year, although he worked for six years at the Vatican in the Congregation of Bishops.

DiNardo, ordained in 1977, was bishop in Sioux City from November 1998 to January 2004. A native of the Diocese of Pittsburgh, he replaced Sioux City Bishop Lawrence Soens when he retired.

DiNardo seemed to embrace the Midwest mentality immediately, said Jerry Eaton, director of the Catholic Charities for the diocese.

"He took a very strong interest in the rural economy, caring for the land and all sorts of issues that are important to Iowans," said Eaton, 62, of Sioux City. "He saw Iowans as independent people, not easily swayed or led astray."

Marilyn Christiansen, 72, of Dakota Dunes, S.D., was honored when DiNardo officiated the 2000 funeral mass for her husband, Russell, who was retired CEO of MidAmerican Energy.

"He was so holy and so fun," Christiansen said of DiNardo. "Probably one of the best homilists I ever heard. He also had a very good sense of humor."

DiNardo told Christiansen a story about a conversation he had with his ailing mother before Easter one year. She asked him if he could come home for the holiday, but DiNardo reminded her he would be very busy during the week leading up to the major Catholic holiday.

"She said, 'Why don't you talk to your bishop?' He said, 'Mother, I am the bishop'," Christiansen said.

DiNardo was also praised for the stance he took on the clergy sex abuse scandal.

"The bishop was very specific here in focusing on the victims and the accountability of the church to them," Eaton said. DiNardo didn't do this as damage control, but because he knew it was right, he added.

DiNardo recommended the Vatican defrock George McFadden, a retired Sioux City priest accused by at least 25 people of sexually abusing them as children. The church handed down a lesser sentence last year, forbidding McFadden from having public ministry or contact with children and ordering him to live a life of prayer and penance.

DiNardo left Iowa in 2004, when he was 54, to assist Bishop Joseph Fiorenza until his retirement, then succeeded Fiorenza as Galveston-Houston bishop, church officials said. Desmoines Register

Rocco Palmo (Whispers of the Loggia) with more details.
Posted by Unknown at 7:54 PM

I was Confirmed by then-Bishop Dinardo.
This is exciting news.

That is one funny picture!

Thanks for the link, Jeremy to the St Elizabeth Ann Seaton Youth Group in Hastings. If you have links to other area youth groups, I would appreciate it very much if you could send them to me. I will put you all on my sidebar.

Kinda cool to have a Cardinal for your "baptizer." Congratulations.

I would imagine Archbishop DiNardo was quite surprised. Although there had been some talk of Galveston-Houston getting a Red Hat because Houston is the fourth biggest city in the country.

But that is a bit of a fake number. There is a special law in Texas that allowed/allows Houston annex property around it without a vote of the residents or property owners.

If Minnesota had that law for Minnesota, Minneapolis (or St Paul) would stretch from Hastings to Forest Lake to Anoka to St Michael to Chanhassan to Lakeville and back to Hastings with a population of 3.0 million or so.

But more than anything it probably was the Hispanic population of G-H that tipped the scale for them. Even though San Antonio is a much more Catholic (and Hispanic) city than Houston.

I agree with Sanctus Belle-I busted out laughing when I saw that photo.