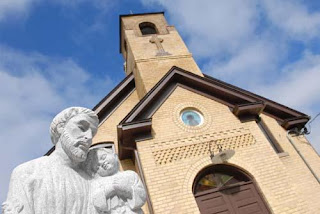 When a priest came to Ted Brausen and asked him if he could "fix up" the 110-year-old St. Joseph Church in Lino Lakes, Brausen bristled. "I pump gas for a living. And that place was condemned."

Four years and a whole lot of sweat and dedication later, Brausen's all-volunteer crew of rehabbers is putting the finishing touches on the reinvigorated Catholic church.

And just in time. After all, Les and Mary Trombley are planning to hold their wedding anniversary celebration today at St. Joseph, 50 years after they got hitched there.

"Our little church is gonna be the envy of every church in the state," said Mary Trombley, a lifelong member, expressing her delight with the restoration. "It has been beautiful. They have done the most fantastic job."

The city was on the brink of officially condemning the building, the second-oldest in Anoka County, in the fall of 2003, when parishioner Brausen and others rallied a crew to take on the project.

"It was pretty trashed," said Brausen, who runs several local gas stations. "There wasn't a love shown to it that should've been."

The Rev. Mark Underdahl said the newly renovated church will have two core purposes: a venue for special ceremonies and a standing testament to parish history. However, members of St. Joseph's are hoping to occasionally celebrate weekly Mass under the new roof.

Terry Meyer, who also helped manage the project with his wife, Jan, said the historic church, with a capacity of about 150, can oftentimes provide a greater sense of intimacy.

Workers reinstalled the pews, which are more than 100 years old, just last week. The pews are refurbished, but some scratches and marks were left to preserve their personality.

Breathing new life into the church has come with its share of disappointments. While tearing out acoustic tiles, workers exposed a large ceiling mural above the altar, adorned with doves and cherubs. Damage to the mural, though, was so severe it could not be preserved.

"It's kind of a shame they did that," Meyer said of the acoustic tiles over the mural. "It was a great piece of artwork."

Brausen estimated the transformation cost about $150,000. Getting new artwork will add another $60,000 to the price tag. When the project is complete, he expects the cost will reach $220,000.

Paying for the restoration has been a

challenge, Brausen said, but parishioners, area residents and businesses have found ways to support the project.

"When we get low on money, all of a sudden we get a check," he said.

For the Meyers, Brausen and others who contributed to the project's success, the past four years have been an emotional and spiritual journey.

"There's a higher power that just kind of made things turn out right," Brausen said.

Mary and Les Trombley, now in their mid-70s, have seen their parish change a great deal over the years - the addition of a school and two new church buildings. As the doors to the historic church reopen, today marks not only another milestone in their marriage, but the preservation of their parish's history for future generations, Les Trombley said.

His bride, Mary, said her relationship with the church is inseparable: "The only way I'm gonna leave it is when I'm buried in the cemetery right next to the old church, so they can wheel me right out."

20: Farmers who donated their time and money

Have been following your blog for several months now and just realized we know each other, but that is another story.

Anyway, I was confirmed at St. Josephs in 1961 and it brought back memories. Your story on the Trappists of Iowa also hit home because as a young man I spent some time there discerning my place in the world.

Keep up the good work Ray.

But now you have me intrigued. Where do we know each other from. I can think of two Rons from grade school.

Hey, Ron! Long time. What's it been, three years since they sold us down the river to the Strib?

I stayed in touch with Bobbie for a bit, but that didn't last.

If you want to email me, you can find it in my "profile" at the bottom of my sidebar.

Nice story, Ray. It's always nice to hear when they rehab a beautiful old church instead of tearing it down.