.
Sexual misconduct plagues U.S. schools.
An Associated Press investigation found more than 2,500 educators whose credentials were revoked, denied, surrendered or sanctioned from 2001 through 2005 following allegations of sexual misconduct. Minors were the victims in at least 69 percent of the cases, and the majority of those were students. 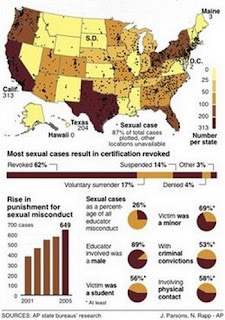 Students in America's schools are groped. They're raped. They're pursued, seduced and think they're in love.

An Associated Press investigation found more than 2,500 cases over five years in which educators were punished for actions from bizarre to sadistic.

There are 3 million public school teachers nationwide, most devoted to their work. Yet the number of abusive educators - nearly three for every school day - speaks to a much larger problem in a system that is stacked against victims.

Most of the abuse never gets reported. Those cases reported often end with no action. Cases investigated sometimes can't be proven, and many abusers have several victims.

And no one - not the schools, not the courts, not the state or federal governments - has found a surefire way to keep molesting teachers out of classrooms.

Those are the findings of an AP investigation in which reporters sought disciplinary records in all 50 states and the District of Columbia. The result is an unprecedented national look at the scope of sex offenses by educators - the very definition of breach of trust.

The seven-month investigation found 2,570 educators whose teaching credentials were revoked, denied, surrendered or sanctioned from 2001 through 2005 following allegations of sexual misconduct.

Young people were the victims in at least 1,801 of the cases, and more than 80 percent of those were students. At least half the educators who were punished by their states also were convicted of crimes related to their misconduct.

The findings draw obvious comparisons to sex abuse scandals in other institutions, among them the Roman Catholic Church. A review by America's Catholic bishops found that about 4,400 of 110,000 priests were accused of molesting minors from 1950 through 2002. [The Catholic records are for a 52 year period of accusations; the public school records are for a five year period that included only cases where sanctions were imposed].

Clergy abuse is part of the national consciousness after a string of highly publicized cases. But until now, there's been little sense of the extent of educator abuse. [....Snip] See the remainder of the AP article with somewhat explicit language here at MyWay.com

It's worth noting that the 4,400 priests were involved in many more than 4,400 cases of sexual misconduct.

If I was to guess, I'd expect schools are better at handling serious issues like this since there is more redundancy built into the system. It's easier to find someone to replace a misbehaving teacher than a priest.

Remember that those 4,400 priests were active in a period of over fifty years!

The examples in the article indicate that "multiple offenders" are not unknown in the public schools.

I would imagine a one time offender might get off with nothing on his/her record.

And being that the majority of teachers are women in the public schools and women are far, far less likely to sexually abuse, those 2,500 largely male teachers in a period of only five years is a pretty significant number.

Your "guess" on the ease of finding replacement teachers is probably on the mark. That would minimize the number of school districts guilty of passing on their problem teachers to other schools in the same district.

But "abusing teachers" might not find it difficult to find employment in other districts by falsifying applications, especially if they are qualified to teach a course where teachers are in short supply.

I wish the map was given as misconduct as a percentage of population. Of course CA is going to have a high number of cases just because it has a large population. It would be interesting to see if there was a higher number of incidents in the more liberal states or not, although I think this is a problem across the country.

Good thoughts. Although trying to take a country with a population of 300,000,000 and make a chart that portrays all of the nuances is exceedingly difficult.