"Over-accessorizing and poor taste in makeup is not an excommunicable offense." 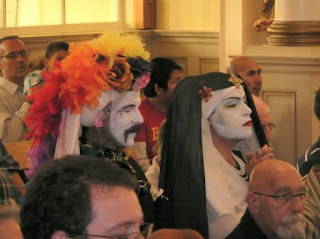 .
As if on cue, the Jesuits chime in on the scandal of Archbishop Niederauer's giving communion to two members of the Sisters of Perpetual Indulgence. From this morning's San Francisco Chronicle:

"The general sacramental principle is that you don't deny the sacrament to someone who requests it," said the Rev. Jim Bretzke, professor of moral theology at University of San Francisco, a Jesuit Catholic university....."Over-accessorizing and poor taste in makeup is not an excommunicable offense."

Fr. Bretzke is the co-chair of the Department of Theology and Religious Studies at USF. He's also on the Advisory Board of the Lane Center for Catholic Studies and Social Thought, who sponsored the "Queer Perspectives" seminar last February at Most Holy Redeemer. Curt Jester from the Chronicle

From Diogenes at Catholic World News October 18:
Via Thomas Peters, we learn that the cross-dressing Sisters of Perpetual Indulgence, two of whom received communion from the hand of Archbishop George Niederauer on October 7th, have posted a facetious press release concerning the incident, headlined "Sisters Upset Communion Being Turned into Political Issue." The press release quotes the "abbess" of the gay agit-prop group, who calls herself Sister Edith Myflesh.

The moniker "Edith Myflesh," it goes without saying, makes reference to John 6:54 (in its King James Version), "Whoso eateth my flesh, and drinketh my blood, hath eternal life." The disdain conveyed by the flip allusion to Jesus' Eucharistic teaching, compounded by the lewdness of the sexual double entendre, points to a hatred of Christianity that borders on frenzy.

The intensity of the gay-activist antipathy as well as its target of choice is displayed with exceptional clarity in the Drag Nuns Communion incident, and the reactions to the incident highlight the fault-lines along which the U.S. Church is split. One might think gay-friendly moderates would cringe at the flamboyance of drag-queen activism and the belligerence of the Sister Edith sacrilege, but in fact the reproaches come exclusively from the conservative side of the aisle, while the progressivists seem unable to grasp what all the fuss is about. Some have hesitantly conceded that the Sister Act was "inappropriate" -- as if the dispute hinged on the etiquette of church-going -- but the general liberal consensus seems to be that anything that antagonizes the Catholic League must be on the right track and worthy of defense.

Deplorable though their stuntmanship was, the Sisters of Perpetual Indulgence may, contrary to their intent, perform a signal service for orthodox Catholics and for the Church at large. Think back to the 2005, and the in-fighting surrounding the upcoming Doomsday Doc, eventually issued as the Vatican Instruction on "Criteria for the Discernment of Vocations with Regard to Persons with Homosexual Tendencies." The controversial point was the Holy See's contention that homosexual men lack the "affective maturity" necessary to the spiritual paternity in which the priesthood is authentically lived out. Remember the delegation sent ahead of time by the U.S. bishops begging that the Instruction be shelved? Remember the squeals when it was issued all the same? Remember the gasps of indignation at its statement that homosexuality was a "disturbance of a sexual nature ... incompatible with the priesthood"?

So picture a priest or bishop working in the Vatican curia who lived through the Doomsday Doc warfare and the arguments back-and-forth. And now on his office computer he's got a video-link to the Mass at Most Holy Redeemer. "Deep-seated homosexual tendencies are objectively disordered," he recites to himself, watching adult men in mascara and nun-drag given communion by a U.S. archbishop, "Got that right." No screed, no treatise, no series of lectures could make the point more memorably.

Will it make a difference, concretely? Not in the short term. The majority of U.S. bishops, remember, was trained in a theological culture that views the Sister's principal lapse as "over-accessorizing." Blasphemy (little different from heresy in this respect) is treated as a quaint, 19th-century sort of sin, the censure of which would be as comically obsolete as a treatment for dropsy or St. Vitus Dance, and few churchmen speak ill of the objective disorder in whose service the blasphemy is uttered. We can expect few efforts to tackle the current scandal. But the post-Conciliar ecclesiastics are passing away, and their successors are bolder where they're wrong and bolder where they're right. By putting their real motives on open display, Sister Edith and her pals have helped shape the terms of the conflict for the next generation.

I saw this on Pewsitters, and also Diogenes has a good commentary.

When I saw the tag "over-accesorizing, I thought you were going to write a post about Cathy's Halloween costume.

But then I read, "poor taste in make-up" and assumed you were posting on how Cathy goes to church on Sunday...ROFL!

I have to give the one "sister" mad props for the Marcel Marceau makeup tribute.

You know, I can SO understand why His Excellency would not have noticed they were real nuns during that extensive SAN FRANCISCO communion line. You see nuns in overdone makeup, 5 O'clock shadow, moustache, and habits everyday, right?