The downtown St Paul's Church of the Assumption's retiring Rev. John Malone has been pulling legs - but no punches - for 40 years 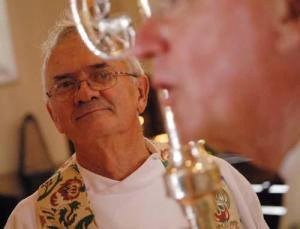 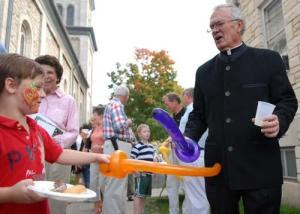 .
The priest faced his parishioners, official videotaped inspiration in hand, created to spur his flock to open their hearts and their checkbooks.

"This is the archbishop's annual fund appeal," the Rev. John Malone of the Church of the Assumption in downtown St. Paul announced from the pulpit. "It's 15 minutes long, and you can see it if that's what you really want.

"But if you promise to be generous, I won't make you watch it."

The video went unwatched. His flock, he says, was generous.

This same priest was giving the homily for a deceased colleague at St. John's Catholic Church not long ago, and he noticed one person in the church starting to nod off.

"Wake up," he scolded Archbishop Harry Flynn. "You could learn something here."

When it was Flynn's turn, he said, "I thank Father Malone for his sermon. I think it might have been a good one."

Malone's is a ministry of loving familiarity fringed in cherubic impudence that seems to allow him great latitude; pious might not begin to describe the priest's beguiling demeanor. A colleague and his own sister call him "outrageous." Malone himself says he does the "unexpected." And a good friend calls him an "icebreaker. Say his name, and people chuckle."

"He is Maloneish," a former priest said, coining a word that may make Malone the first St. Paul clergyman to have his very own adjective.

More adjectives will be hurled around Sunday at a retirement open house at Assumption for Malone. After 40 years in the priesthood, Malone is retiring from leadership in the parish, which is celebrating its 150th year. The building and its priest, who is 66, have become cherished icons in this town.

Malone presided over the burial of restaurateur Nick Mancini last year and had an announcement to make that morning.

"I have some sad news," he said gravely. A thousand mourners were stunned. What could be sadder than to lose Nick?

"For all of you who are holding gift certificates for Mancini's, his sons tell me those certificates will no longer be any good.

"But Dave Cossetta will honor them!"

There was a moment of silence, and then a rousing cheer and applause. Everyone in Malone's packed church had, at one time or another, been the recipient of one of those familiar silver certificates for steak dinners from Nick, and everyone there knew of the special bond between Nick's family and fellow West Seventh street restaurateur Dave Cossetta.

Above all, Malone knew precisely what to say to set the tone for a celebration of Nick's life and service to his community. And no one was surprised or upset with the respectful flippancy of this priest.

He is known for his respectful flippancy. And his 30-minute Mass.

"Thirty quality minutes," Malone jokes. "It's gotten up to 35 minutes on occasion, but that's when the music infringes on my homily."

He said he once posted a photo of a bulldog inscribed with the urgent admonition, "You can do it in 5 minutes!" as a message for all visiting priests.

"He's the epitome of the right length for a Mass," Cossetta said. "If it's a Viking-Packer Sunday, you may get out of there quicker."

On a recent Saturday, the church was almost full for the 5 p.m. Mass. At 5:07 p.m., Malone was into a parable about lepers, and by 5:10 he was out of it, having left the indelible message that God is present in our lives if we are willing to accept Him. By 5:13, the collection had been taken and it was time for Communion.

"He says more in his five minutes than most others can say in 20 or 30 minutes," said another friend, West Side restaurateur Joe Nasseff. "He has a rare gift. Sometimes it's humorous, but he makes a point and moves on."

Now he's moving on from Assumption, but only, he said, because he has abundant trust in his successor, the Rev. Steve O'Gara. Who would have guessed? Malone and O'Gara in charge of a German Catholic church.

"And you oughta see Malone in his lederhosen at our Oktoberfest," said Joan Farley, a parishioner. Malone will step away from the church for a while but will not go away. He still teaches at the University of St. Thomas and is also a lawyer who has defended a generation of students who, from time to time, run afoul of the law. Pro bono, of course.

"He showed up in his collar one time when he was defending a bunch of St. Thomas kids who'd messed up," recalls Louie Torinus, a former public defender colleague. "He thought the judge might fall for it. It worked."

One of his best friends since his seminary days at Nazareth Hall is the Rev. Michael O'Connell, pastor of the Basilica of St. Mary in Minneapolis. The two needle each other mercilessly about everything from horse racing and golf to cooking (Malone once invited his friend to a gourmet meal and almost blew the doors off the rectory when his vodka-soaked chicken erupted in the oven).

And then there is that 30-minute Mass.

"Our masses at the Basilica are rarely shorter than an hour," O'Connell said. "There is a real difference between fast food and fine dining. If Malone ever says anything about that, I remind him that there must be a reason why Assumption is just across the street from Mickey's Diner."

The two priests make modest wagers when they golf, and one time Malone won the Basilica in a game. When he crowed about it, O'Connell sent him the winter heating bill.

"Things have worked out well for both of us," O'Connell said. "We started the seminary together in 1959, the same year as Vatican II, and it had a great impact and shaped our ministry. He was taught to reach out to the poor and seek justice, and he is not afraid to speak his mind. So he can say almost anything, and he does.

Malone was in on the creation of the Dorothy Day Center for the homeless across the street from the church and regrets he'll be out of the country next summer during the Republican National Convention, also planned for a site across the street.

"What I'm going to miss is the GOP reaction to the homeless" - the poor, the homeless, the sick and especially the dying, Malone said.

"We've been afraid for so long to be around the dying. Death is a longer process now because people are living longer, and they can be very vulnerable. But this can be a beautiful time when life can be embraced - at the end of the journey. The clergy are fortunate to be present at that time."

"He's a champion of the poor and the sinners," said his sister, Kathleen Malone Stroh. "He and I are a year apart and have always been the best of buddies. I try not to drop his name. People say, 'You're related to John Malone?'

"He's awesome and outrageous, and he's my hero."

The Rev. Gene Abbott, an assistant pastor, keeled over while saying Mass one Sunday and was hauled to nearby St. Joseph's Hospital. Malone came rushing into the emergency room, waving a copy of the priest's living will, saying, "I have here the document that determines if we should bring him back!" When the priest opened his eyes, Malone said, "I suppose you expect to get paid for the whole Mass."

When Malone, an East Sider, was giving the homily at the funeral of famed hockey coach Herb Brooks, he went down the list of Herb's accomplishments: Gophers hockey team, Gophers coach, coach of the 1980 U.S. Olympic Gold Medal team, professional hockey coach, etc.

"Just imagine," Malone said, "what this guy could have done if he had only gone to Harding instead of Johnson."

It's simple, O'Connell said: "John Malone does what every priest should do: He shows up.

"And he speaks to the heart of St. Paul." Pioneer Press